Orillia to The Big Chute 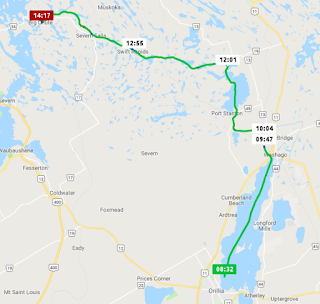 The deal at the Port of Orillia Marina was buy two nights, get the third free. So we did that, hanging out in the cute town, walking the street fair going on that weekend, and enjoying the lovely weather.

Today we intended to stop and eat lunch at the restaurant in Severn Falls. Apparently, so did half of Canada. The dock was stuffed with all sort of little boats, speed boats, pontoon boats leaving no room for us. Or any looper, for that matter. So we pressed on to... THE BIG CHUTE.

We knew it was coming, the last of the crazy locks on the Trent Severn, but We. Had. No. IDEA. The thing is huge! It carries two boats at a time. While it's impressive that it lifts the boats up and over a road, what's crazy is that it takes them down another 58 feet to the other side.

The large carriage rides on two sets of rails, so one end goes down faster than the other, keeping the carriage (and the boats, therein) level.

Apparently, this is a 2.0 design. The first version didn't keep boats level. They'd thought of that, using various straps and slings to hold them, but eventually, things went badly.


We plan on doing this first thing tomorrow. Then, it's out to the Georgian Bay.