There's a saying in the boating world, that the happiest days of a boater life is the day he buys the boat and the day he sells it.
This week we closed on the sale of Cat-n-Dogs. I'm thoroughly crushed. I really loved the boat. For a while we thought we might keep her and move her up north where we could do summer vacations cruising the great lakes while wintering inQuest on the gulf and Atlantic. Alas it's not to be.
The new owners are scuba divers and wanted an "outting" boat for long weekends or a couple of weeks of cruising. She'll do that well. She's been vetted.
The last time I took her out was for her sea trial for these buyers. It was just a quick out-and-about kind of cruise in the Sarasota Bay. We took her wide open for about 5 minutes, which should have been fine, but on of the engines overheated. Later we discovered her running gear was fouled with growth (barnacles, worms, whatnot). We had her cleaned up and did another run a couple of weeks later (different pilot, though, not me) which she passed with flying colors.
There there it is, the real end of the blog. She took us on quite an adventure. I hope the next owners have similar experiences.
at May 15, 2020 No comments:

Well, the caveat is that we haven't sold the boat yet, so there may be other adventures that await her.

In the meantime, I have my new blog up and running. If you want to follow our current travels (which are on hold until some upgrades are done) you can find it here.

We've had a NEMA system that tracked various data, like our speed, our pitch (front and back up and down) and roll (side to side up and down). It gets displayed in a graph; blue is speed, green is pitch, and red is roll.

Below is how that data looks from the gulf crossing. You can see that when we slowed down (and it was rough, which is why we did) the pitch and roll worsened. The peak on the red was over 10 degrees on either side. Once we could speed up, things calmed down. 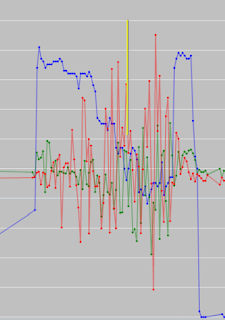