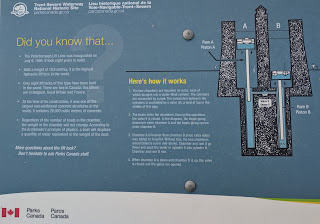 The Peterborough Lift Lock is a small legend here in Canada. Built in 1904, the lock is one of only a handful world wide. It's one of two in Canada, the other just a ways up the Trent-Severn. It's also the tallest in the world.

We took our bikes out to see it in action. We went up to the top where the lock to the control booth. As luck would have it, a couple of boats came down needing to be lowered.

After that the control booth operator came by. We mentioned we were loopers and he immediately invited us into the booth. Some more boaters needed to ride up. I got to operate the lift and make the announcements to prepare them for the experience. I have pins for my efforts.

The following day we brought out the kayaks and paddled over. We locked through lock 20 and then rode 21 up with four larger boats, most of them loopers we knew.

We tied off at the top and took a second tour with John and Martha (As You Wish). The four of us rode Lock 21 down by ourselves. The whole thing was quite an experience.

The day was cooler than yesterday but still warm enough to kayak under the large fountain spray in the middle of the Otonabee River.

It was a wonderful day to spend on the water, little boat style.


Peterborough has a population of 65,000. Blew me away. I asked some folks why it was here. The story is that some body came over and liked it, so he invited some of his farmer friends. It's a farming community, not lumber, coal, or mining. And unlike other cities we've been to, this one is open all year long. 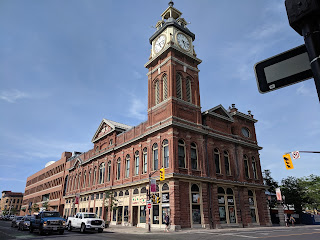