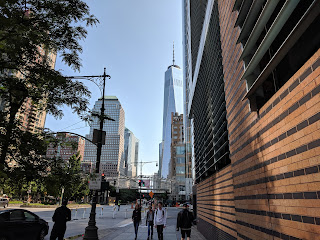 After the long journey here we decided we'd spend a couple of days in New York. The first day we spent here on Staten Island. Largely for the dogs. When we travel we tend to keep them below deck so they can't do anything stupid resulting in a "man overboard" exercise. But it was a really long day, so they were left alone for quite a while. Then we went out to eat because we were starving, leaving them again. So yesterday was pug day.

There's more I'd like to do. Getting to the city will be easier from the next marina, Half Moon Bay. We're headed there tomorrow.


This made me laugh. Watch for the gopher on the fence!