Little Diversion to, well, a sand bar in Kentucky 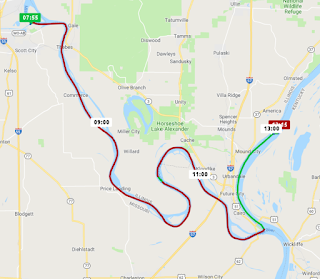 Literally, we're on some sand bar on the Ohio in Kentucky. There were anchorages still available to us on the Mississippi, but we were all in enthusiastic agreement to, and I quote, "get the hell off this river." And there aren't many options between here and Paducah. So, around 1 pm, we threw out the anchors, fired up the genny, turned on the AC, then hid inside away from the near 100 degree heat while clinging to some sand bar separating us from the Ohio channel. I will so turn on our anchor light tonight.

When looking at our travel map you'll notice that while on the Mississippi our track is red, meaning we were going over 10 knots. At times we went as fast as 14. There's a tiny place where the track goes green. That was the most exciting part of the day.

Ahead of us, about to make that crazy U-turn, was a tow. He was moving in the same direction as us, and traveled over 10 knots himself. We hailed him (having caught up to him) and asked how he wanted us to pass. He said to hold off until we get by these tows. The tows he spoke of were a bunch coming up the river that pulled over to get out of his way. There had to be 8 or so of them. He had the right of way, heading with the current, which meant he didn't have near the control over his rig as those heading against the current. We skittered along behind him as asked.

Then he hailed us and said to close up the gap so we could pass him on the one (the right). Both As You Wish and us jammed on the speed, trying to catch up with him (that's when we went 14 knots). Just as we got close enough to start the pass he hailed us again -- another boat was up bound and it would be best for our leading tow guy to pass him on the two. For him to do that, he'd have to swing way over to the left, which set him up for the turn anyway. So he asked we pass him on the two instead, and he'd swing out behind us.

At that time, one of the tows that parked out of his way fired up their engines and started out behind him. We kept the engines throttles while we weaved between the tows. Keep in mind these things are over 1000 feet long. It took a long time to pass this guy at 14 knots. I couldn't help by look behind me as As You Wish blasted by the tow, just as the huge vessel made the swing out. Looked like John and Martha were gonna get swiped by the big, pushing tug boat. But it all worked out. We promptly slowed down ... to 12 knots.

I noticed that without adding rpms to our engine's efforts we were moving much quicker. The further south we went on the Mississippi, the faster it went. All that made the eddies and swirls and whirlpools even stronger. Most of the day was traversing a maelstrom of current.

When we finally made the turn up the Ohio, the waters calmed immediately. Like magic. Without any explanation why one river was so contorted and the other placid.

On the minus side, we're only moving around 7 knots now.