Florida is a quacky State

Don't get me wrong, there's a couple of things Florida does right. For example, when you are driving and you wonder to yourself what is that intersection coming up ahead they have signs that tell you in advance, which is extremely handy. But how they handle driver's licenses is not in their "plus" column.

Most states have something called a DMV. These are state-run offices. If the DMV near you is crowded you could go to some other DMV to get your driving needs addressed. Not so in Florida. Drivers licenses are the responsible of each and every county, specifically the County Tax Collector. This is a problem for us since the county we officially live in -- where we get our mail -- is not the county I actually live in. So to get a driver's license for the State of Florida we had to take a three and a half hour drive up to Green Cove Springs.

All of which is fairly interesting given we're technically not going to be living in Florida much of this year at all. But insurances require such things so there we go.

You'd think that would be a pretty definitive document. However, since we live on a boat, its registration number is my "address." Really. Take a look. 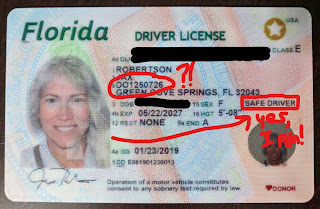 In conclusion, my official state identification doesn't have either my mailing or living address on it. I'm sure that won't cause any confusion.

In Florida's "plus" column, we discovered a new ramen place. We were headed for lunch at Poppo's, which has become a favorite Mexican place. They have several locations, and we were trying a new one. As we pulled into the parking lot, we noticed a ramen shop called Mitaka. It was a dreary day, and a little cool, so a bowl of hearty soup sounded good.
Being from the Bay Area, land of amazing Asian foods, we didn't expect much. It was incredible! We ordered vegetarian gyoza, veggie ramen, lobster udon, and washed it down with a junmai sake. I thought the lobster udon would just have some bits and pieces of lobster floating in it. Boy, was I pleasantly surprised.